Learn All About This Brand
Browse Inventory

Freightliner is a truck manufacturer based in America in Portland, Oregon. The company produces medium-duty and heavy-duty trucks, vans, and chassis and cutaway chassis. Freightliner is part of Daimler Trucks North America.

The History of Freightliner

Leland James founded Freightliner in 1929 to produce semi-tractors for internal use. The design placed the cab right over the front axle to make it shorter in length. This allowed the company to use a longer trailer while maintaining compliance for laws that were in place.

During the 1930’s, Freightliner developed trucks which were reduced in weight for greater power in the engine. In 1942, the company became the first developer of the all-aluminum cab. During WWII, Freightliner worked on military vehicles and didn’t resume production of trucks until 1947. The first vehicle sold outside of the company was in 1949.

To increase distribution, Freightliner partnered with White Motor Company and sold these vehicles with co-branding. Another cab was introduced in 1953 with a sleeper mounted overhead.

The company expanded in the 1960’s with a manufacturing facility set up in Canada and assembly plants added in the US. Freightliner separated from White Motor Company in 1974, which allowed it to become its own manufacturer and distributor. The company continued to make trucks that met regulations until 1979, when laws deregulated the transport industry.

With the change in regulation, companies struggled that had flourished before. Daimler-Benz bought both Freightliner and Consolidated Freightways in 1981. A new series was introduced in the next few years which followed the Mercedes cabins in design. The first cab to be released in the medium-duty market by Freightliner in many years became available in 1991 and was known as the FL-Series.

Freightliner acquired other companies to expand its offerings. For instance, in 1995, it purchased Oshkosh Custom Chassis to produce underpinnings for vans used commercially, such as with UPS and Cintas. The company was renamed in 2008 as Daimler Trucks North America. It has remained a strong presence in heavy-duty trucks.

The second generation of Sprinter Vans was launched in 2007 with a diesel engine. By 2013, over 2,200,000 vans are on the highways around the world. This model came equipped with advanced safety technology. A redesign came in 2014 when the company added an innovative feature known as Crosswind Assist. To further enhance the versatility of this van, in 2015 a 4x4 became available. This feature made it the only four-wheel drive commercial van available in the US.

Freightliner continues to manufacture Sprinter Vans with the option of a Cargo Van, Crew Van, and Passenger Van. It also produces the Cab Chassis in multiple models for commercial use.

The Passenger Van holds 12 or 15 and comes in 1500 and 2500 trim levels. For all vehicles, you can choose from multiple trims and various options, such as engine size and wheelbase length. The Crew Van offers seating for five and maximum space for cargo. All vans can be upfitted to fit the needs of businesses in a variety of industries. 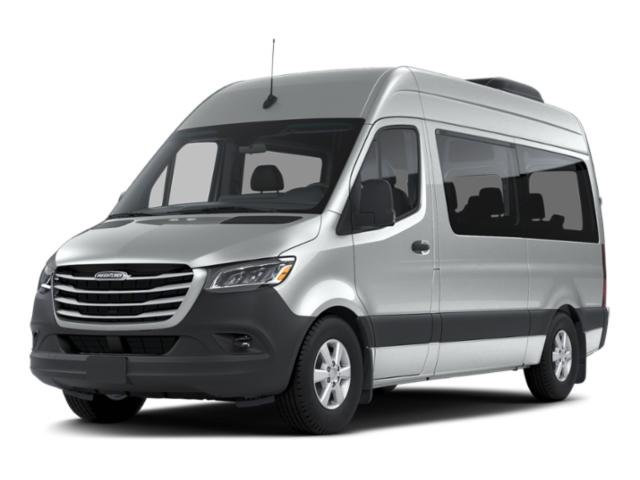 0 Views
Details
Send to My Phone

Picture may not represent actual vehicle. Price varies based on Trim Levels and Options. See Dealer for in-stock inventory and actual selling price. All prices plus tax, title & license with approved credit. MSRP includes delivery, processing, and handling fees. Dealer doc fee of $200 not included in the price. Prices may be different outside of each advertised period and do not necessarily reflect cash price at any other time. Inventory is subject to prior sale. We are not responsible for typographical, technical, or misprint errors. Please contact us directly via phone or email to verify all